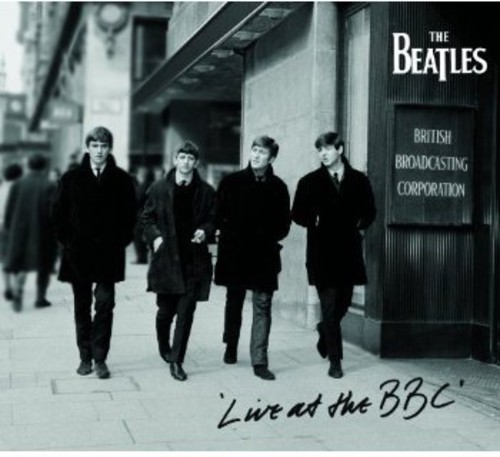 Newly remastered for reissue, The Beatles' first Live at the BBC album sounds and looks better than ever. This collection of the group's BBC sessions mixed versions of their hits with a treasure trove of 30 songs The Beatles performed on air but never released on record in the 1960s.

In 1994, The Beatles' Live at the BBC was released to worldwide acclaim - hitting number one in the U.K. and number three in the U.S. and selling more than five million copies within six weeks. In the studios of the British Broadcasting Corporation, The Beatles performed music for a variety of radio shows. Live at the BBC presents the sound of The Beatles seizing their moment to play for the nation. Thrilled to hear these exciting recordings again, Paul McCartney said, 'There's a lot of energy and spirit. We are going for it, not holding back at all, trying to put in the best performance of our lifetimes.'Between March 1962 and June 1965, no fewer than 275 unique musical performances by The Beatles were broadcast by the BBC in the U.K. The group played songs on 39 radio shows in 1963 alone. Ringo Starr said in 1994, 'You tend to forget that we were a working band. It's that mono sound. There were usually no overdubs. We were in at the count-in and that was it. I get excited listening to them.' On their busiest BBC day, 16 July 1963, The Beatles recorded 18 songs for three editions of their Pop Go The Beatles series in fewer than seven hours.The group played 88 distinct songs in their BBC sessions - some were recorded many times; others performed just once. At the time, three national BBC stations provided all daytime radio broadcasting in the U.K. Only the Light Programme network might occasionally play a record. Most broadcast music was live music. Consequently, to promote their releases, The Beatles had to play live at the BBC. 'Everything was done instantly,' remembered George Harrison, 'But before that, we used to drive 200 miles in an old van down the M1, come into London, try and find the BBC and then set up and do the program. Then we'd probably drive back to Newcastle for a gig in the evening!'Newly remastered for reissue, The Beatles' first Live at the BBC album sounds and looks better than ever. This collection of the group's BBC sessions mixed versions of their hits with a treasure trove of 30 songs The Beatles performed on air but never released on record in the 1960s. The compelling track list ranged from a rare performance of the little known Lennon-McCartney original 'I'll Be On My Way' to covers of classic rock 'n' roll and contemporary rhythm and blues songs. At the time of its release, Live at the BBC was hailed by Rolling Stone as 'an exhilarating portrait of a band in the process of shaping its own voice and vision.'. It earned a GRAMMY Award nomination for Best Historical Album. Live at the BBC was assembled by George Martin in 1994.Package Description:- 2 CDs packaged in soft pack- 58 songs (plus 13 intros) recorded live by the Beatles in the BBC studios between 1962 and 1965- 48 page booklet